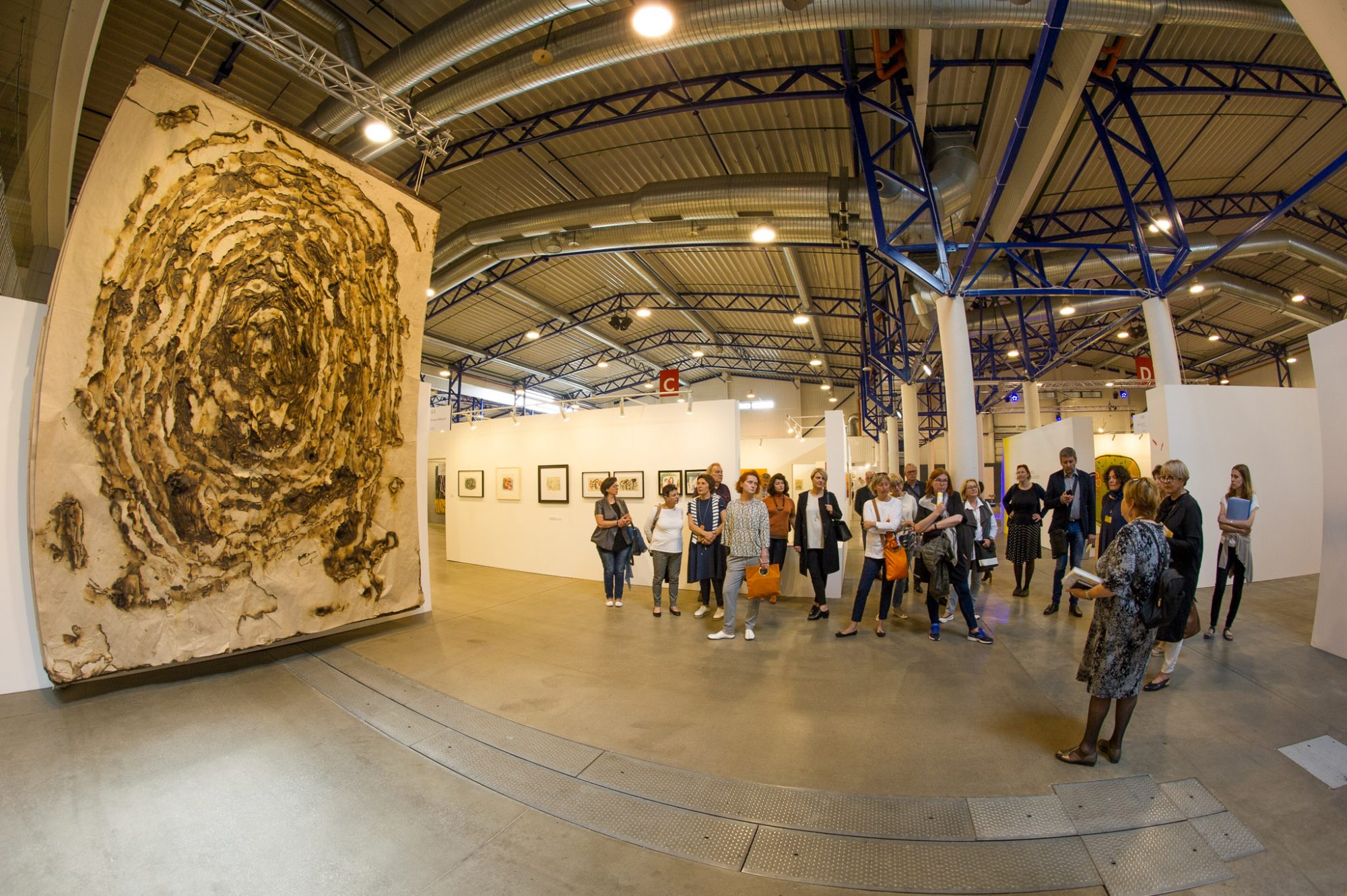 The contemporary art fair ArtVilnius’17, which concluded its eighth annual edition on Sunday, has set a number of new records. The four-day event at the Litexpo exhibition and congress centre was visited by some 22,500 people who purchased over 200 artworks, a significant increase from last year.

The final tally might be even higher, says Diana Stomienė, the director of ArtVilnius’17. “The numbers are not final, since, as everyone knows, art sales that start at the fair then move to galleries and continue until next year’s fair. We cannot track the number and worth of these transactions. Art recognizes no borders, so I am happy that not only have we received more visitors this year, but also more collectors interested in artworks by Lithuanian and foreign artists. We can observe a new generation of young art lovers and collectors making their way to our art fair,” she enthused.

This year’s fair attracted even more visitors than last year. Interested collectors came to ArtVilnius’17 from France, Germany, Italy, Russia, Belarus, Latvia and Estonia. A number of ambassadors and diplomats have also been among the visitors, while the guest list of Lewben Art Foundation’s art collection presentation event, organized by the fair’s exclusive partner Lewben Group, featured prominent dignitaries from the art and the business worlds.

This year, buyers at the art fair were equally interested in foreign artists and offerings of Lithuanian galleries. Stalowa from Poland has been named one of the seven best galleries at ArtVilnius’17 and has sold several artworks. Equally successful were ArtVilnius regulars: Maksla Xo (Latvia), Karavan (France), NB Galleri (Denmark) all enjoyed good sales. Immaginaria Arti Visive from Italy, Happy Art Museum from Latvia and Grosart Romta from Russia, all returning to Vilnius for the second time, also concluded a number of successful deals.

Cobalt law firm, a Maecenas of ArtVilnius, has delivered on its promise made last year to enrich its art collection. The firm, which supports aspiring creators and each year awards one best young artist, has brought back three artworks from ArtVilnius’17. Irmantas Norkus, a managing partner at Cobalt Lithuania, picked a piece by Auksė Miliūtė from The Rooster Gallery’s stand and two works by Maria Safranova (Kovcheg, Russia).

“This art fair has already established itself as a visible and important art event in the entire Eastern European region. This year, in cooperation with the fair’s organizers, we took one more step in promoting interest in contemporary art: We set up the ArtVilnius club and organized an art support dinner, the first of its kind in Lithuania. The funds raised during the event have been donated to Path, the international sculpture, installation and performance exhibition. As a result, the exhibition this year received particularly many applications from young artists, which attests to the fact that cooperation between art and business can bear great results, artists can showcase their works that have never been exhibited before. We are also very happy that ArtVilnius’17 was this year notably rejuvenated. We saw significantly more young artists who are the builders of our progressive society of the future,” Mr Norkus says.

Last year at ArtVilnius’16, he purchased seven pieces by prominent artists, delivering on his promise to support creators, both aspiring and accomplished. Everyone who can invest in art and support artists in their pursuit for great artistic production, Mr Norkus believes.
Seven best galleries awarded at ArtVilnius’17

Traditionally, the best artists and galleries were announced on the opening day of the art fair. One of the novelties introduced in this year’s edition of ArtVilnius is that as many as seven galleries were named as the best.  The winners were picked by a jury of art professionals chaired by art historian Virginijus Kinčinaitis. Other jurors were art historians Dr. Virginija Vitkienė and Ernestas Parulskis, artists Deimantas Narkevičius and Žilvinas Landzbergas.

ArtVilnius’17 best young artist Povilas Ramanauskas (Meno Parkas gallery) was awarded with monetary prize provided by the event’s Maecenas Cobalt law firm. Regular visitors of ArtVilnius’17 also had the chance to pick their favourites that received monetary prizes from Volfas Engelman. “Audience Select Gallery” is Dusetai Art Gallery  and “Audience Select Artist” award went to the artist duo Remigijus Kriukas and Indrė Stulgaitė-Kriukienė from the same gallery.
ArtVilnius’17 patron is the City of Vilnius, the main sponsor is the Lithuanian Council of Culture, the exclusive partner is Lewben Group, the event’s Maecenas is Cobalt law firm.
Share on Facebook Share on E-mail