SARAH HADDOU, ARTIST ENCLOSED IN A CROSS: “PERFORMANCE ALSO RELEASED THE DARK SIDE OF THE AUDIENCE” 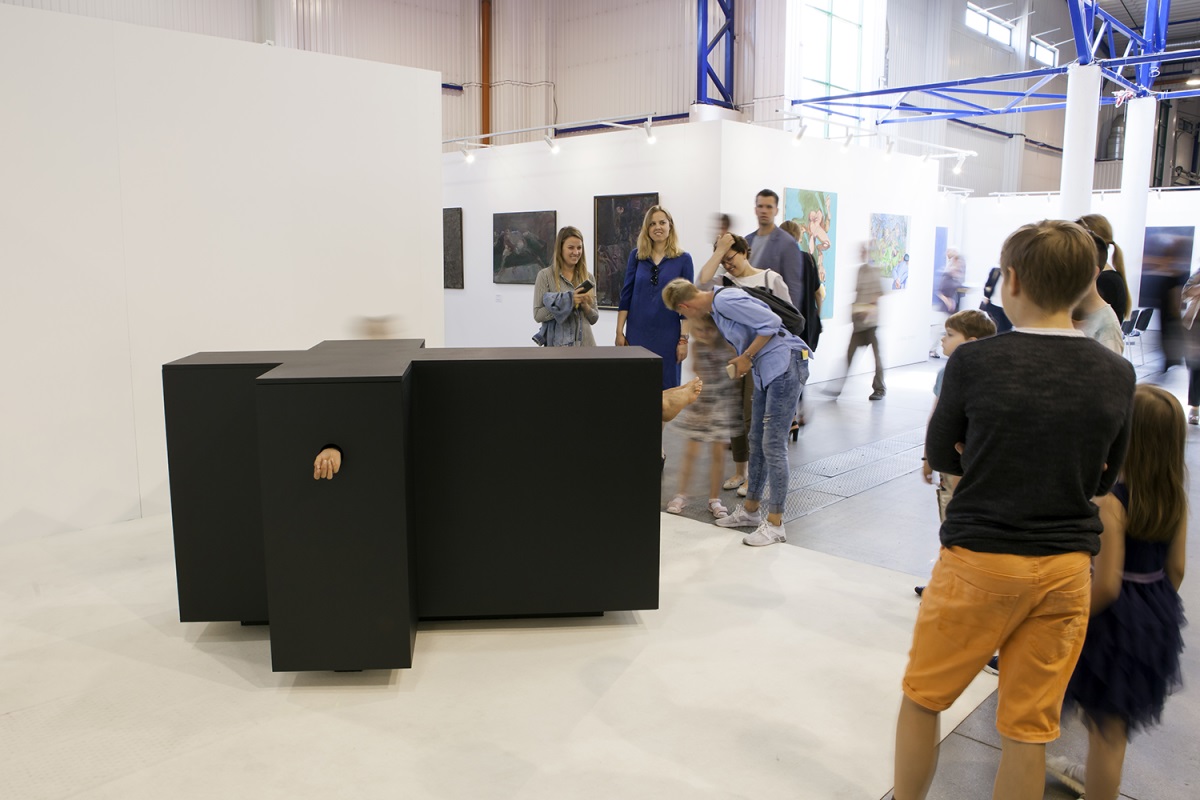 The eighth edition of International Art Fair ArtVilnius’17 is proud to have welcomed even more visitors this year who were offered an extensive programme introducing dozens of international art galleries and art stars from all over the world. This year, the art fair, among other things, presented its audience a powerful programme of performance art raising provocative and uncomfortable questions.

One of the most mystic performances was presented at the art fair by young French artist Sarah Haddou who stayed enclosed in a cross-shaped box for six hours on all three days of the art fair. Sara Haddou kindly agreed to tell me about the origination of the Chiasmus performance and the experiences she gained during the creative process.

How did you get the idea to create this performance?

My creative process often arises from my interest in religious myths, philosophy and Jungian theories and also from my own experience as a child raised with all the weight of Manichean notions… I think the religion we inherit from the family background should always be questioned when turning to adult from a personal and critical perspective before to be adopted as our own belief, in opposition to repeat an imposed pattern. When I’m painting, I use to hear audio books on religion, philosophy or psychology. I found those topics undeniably linked and even deeper when approached together. Also I take notes and draws on the walls of my studio mostly from intuition. The image of a heavy cross enclosing my body was quite repetitive in my head during several months until its materialization.

What is the main idea of this performance? Does it continue your previous works and ideas of your creation?

Chiasmus, pronounced Kiasmus, is a term from the Greek that means “crossing”. That is a figure of speech in which two or more clauses are related to each other through a reversal of structures in order to make a larger point. The invasion of this religious symbol aims to create a dialogue on the conceptual meaning of it and the relationship between our material presence and our soul, how the human being relates or positions himself with the sacred. It questions what is considered profane standing from the postulate that the mythological characters considered superior or divine as the Christ, invites ordinary mortals to recognize in themselves their profound ability to transcend their human nature and to seek to attain their divine essence or higher self. In my previous works, I explore the layers of the subconscious that shapes the boarders we create around ourselves.

I try to make the energy fields of the personal space (the aura) more palpable isolating the body from the others, or some parts of the body in order to raise my awareness and consciousness and then share it with the audience. However I don’t find it possible in normal life situations because as westerners, we live generally in a self-indulgent mode: in this century we want everything to work fast, to get pleasure and be entertained all the time, also the electronics to search, to calculate, to watch even live event through it, to keep our memories and to connect with the others for us… Through durational and extreme performances, I can get to a higher frequency when surpassing my limitations.

6 hours per day during 3 days inside the cross. What ind of feeling is it?

When the assistants close the heavy top of the cross, it feels like to be buried alive… the audience becomes my connection to life through the contact of my feet and hands.

What was the reaction of the audience? I have seen that many of them were trying to touch you?

My body became so tensed and my extremities so cold that some people had to touch me several times to believe it wasn’t a wax sculpture. Although I am normally very sensitive to tickles but in that case, the pain was taking all my attention, but when people were taking my hands in theirs, it felt incredibly relieving as their warm energy where recharging all my body in those moments. On the other hand, the dark side of the audience also awakens when a body is abandoned to their will… some of the people pinched me to make me react (without success) and even a child bite me on my finger!

Have you been conscious all the time? Or did you sometimes fall asleep?

It was quite impossible to fall asleep due to the uncomfortable posture, but anyway, that wasn’t the point. I wanted to be fully present during the three days of performance to get the best of it. Ironically, to enclose myself in a box gets me to shift to a higher frequency where I could experiment a glimpse of the infinite: where there is no beginning and no end.

What was the hardest thing these days? Physical pain?

The first and second days were very painful for to maintain the position, after (more or less) one hour inside, I already felt it and had no idea of the hours left so the challenge was to surpass pain and boredom…

But to be able to get to a deeper level of consciousness (even for a moment), toughness was necessary. Exactly like a monk gets it through hours of meditation and fasting, I could finally, on the last day, separate body (pain) and mind to enter in a sort of bliss, with a higher level of awareness, hearing every sound around me without thoughts and notion of time. This is the deepest meditation state I’ve ever experienced.