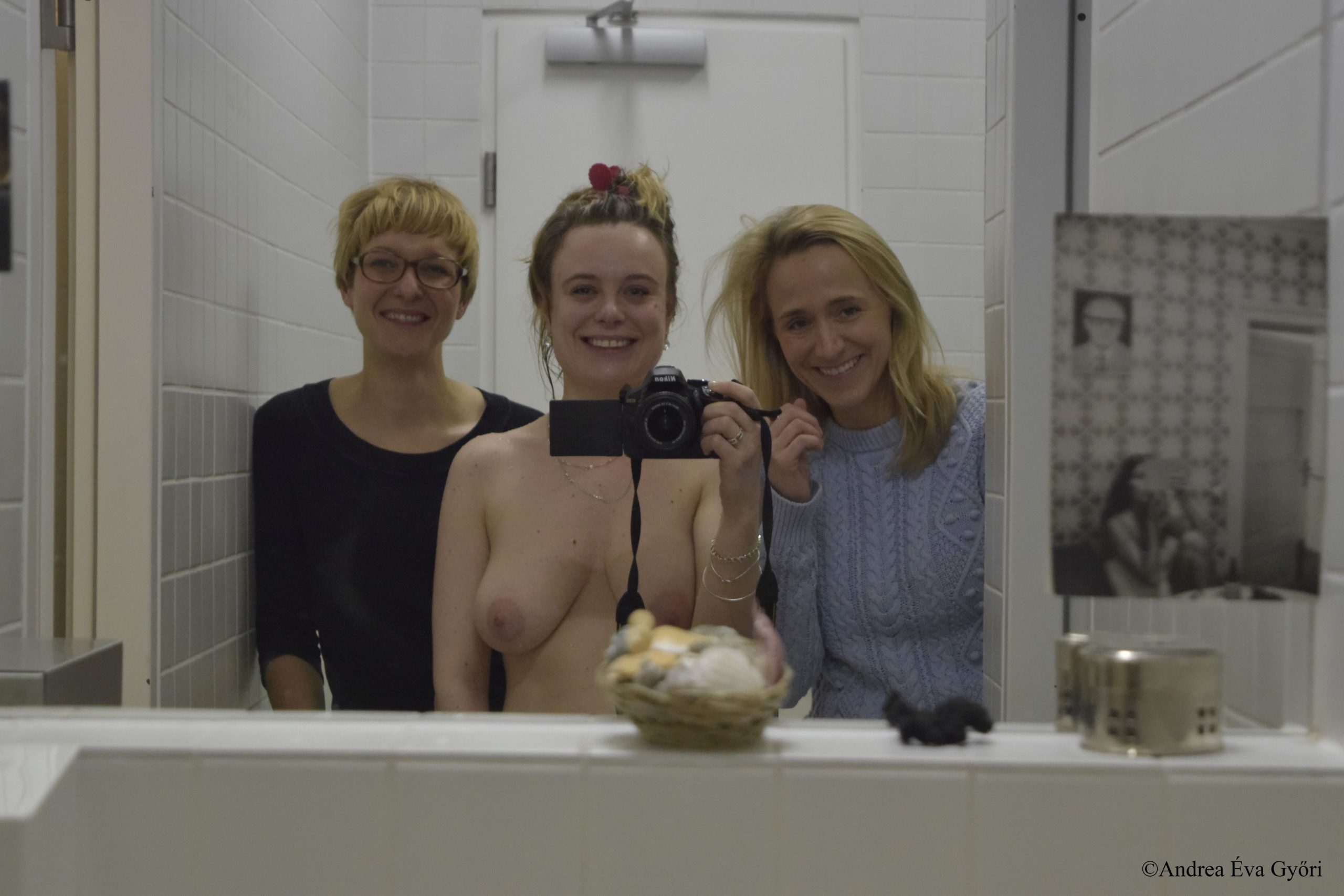 Although video art emerged already at the end of the sixties, in many countries people are still suspicious about this type of art. Moving images are not favoured by art collectors, either, as they cannot flaunt their DVDs as artworks.

However, thanks to the efforts of art lovers, creators and curators, this type of art is obstinately ploughing its way to official art institutions, art fairs and festivals. Today we can say that there is hardly any contemporary art exhibition or fair without at least one moving image art work.

VIDEONALE, one of the Europe’s oldest festivals for video art, has been organising this event in Bonn, Germany, and touring with the selected programme around the world for 30 years. It is the only festival of video where the selected works are shown for a period of several weeks in a museums exhibition, presented not in video programmes but as single presentations in special exhibition architecture.
This year, the 15th edition of VIDEONALE.15 will be visiting Lithuania during International Contemporary Art Fair ArtVilnius’15 on 25 – 28 June. Artistic director Tasja Langenbach and project manager Jennifer Gassmann will be specially arriving from Germany to present VIDEONALE.15 in Vilnius. During the interview, Tasja Langenbach and Jennifer Gassmann, told the story about how a small festival initiated by students in 1984 has grown into a world-scale event.
(TL: Tasja Langenbach, JG: Jennifer Gassmann)
First of all, could you please introduce yourself? When did you enrol into the VIDEONALE? What has brought you into the world of video art?
TL: My commitment with Videonale began in 2008 when I started working with its former director, Georg Elben, to prepare the 12th edition of the festival. I worked with him as a programme and project manager and stayed with the festival since then. But since we are all working freelance and Videonale only takes place every two years, I also did other projects besides Videonale, most of them also related to moving images. When Georg Elben left the festival in 2012, I took over his position as artistic director, so VIDEONALE.14 was my edition as the festival’s director.
How I came to work with video art? I always was interested in the medium, already when studying art history at the university but contemporary art wasn’t such a big topic there and then. After my studies I went to work at the ZKM-Center for Arts and Media in Karlsruhe for a while which is one of the biggest art centers devoted to contemporary media arts in Germany. After that I started working for an art gallery in Frankfurt with a strong focus on video art, which actually still today is quite rare since video art has a difficult positioning in the gallery market. During my years in the gallery I got my most important insights in all aspects of working with video art, regarding the challenges with exhibiting and selling it, bringing it to art fairs, but also with the constraints artists face during the course of production, postproduction and distribution.
JG: I have started working for the VIDEONALE.14 as project director and director of the festival programme in 2012. For me it has been a great challenge to work for a significant festival like this, but also a good possibility to incorporate my own ideas into the project and realize them.
I studied art history, theory and history of photography and film studies at the University of Zurich, so the moving image had already played a role during my education. Next to my studies I managed a gallery for contemporary art in Zurich, have worked as an art advisor and curated exhibitions but more with a focus on contemporary photography. But if you are dealing with contemporary art you are also dealing with video art. My work for the Videonale gave me the opportunity to get even more involved in this topic.

Can you shortly tell me the history of Videonale. I know that it was launched as a student initiative in 1984 in the German city of Bonn. How did this initiative grow into an influential event in the video art world and even managed to celebrate its 30th anniversary and its 15th edition this year?

TL: When Videonale was founded in 1984, the video as a medium already existed for about 15 years but – at least in Germany – there were no festivals, museums or other institutional platforms where video art was presented to the public in a bigger scale. But not only in Germany, even in Europe there were hardly any festivals or similar platforms for that medium, just one or two in Italy, France and in the Netherlands. So, for the founders of Videonale it was simply a personal necessity to create their own platform if they wanted to know what’s going on in the world of video art-making.
However, in the region where Bonn is located – the Rhine area with cities like Cologne and Dusseldorf close by – they met a great interest with their activities. Cologne was the center of the German avant-garde at that time with a very active art scene and there also were people like Nam June Paik or Joseph Beuys working as professors at the art academy in Dusseldorf, pushing the video medium with their own artistic activities. In Cologne you also had curators like Wulf Herzogenrath who started as one of the first ones to exhibit film and video in his institution, the Kölnischer Kunstverein. There were also some artist initiatives and even art galleries who supported this new medium and promoted it in different events. Hence, Videonale was founded in a fruitful surrounding which also might be one of the reasons why it was so successful from the beginning and continues its work until today.
But for sure it wasn’t an easy task for the different teams and directors to keep the event on running, there definitely also were long periods where the applause of the artists and audiences were the only payment they received. But of course the situation became much more stable today, especially after Videonale moved to the Kunstmuseum Bonn and has the possibility to show its exhibition in the museums spaces every two years. This move very much helped the festival to change its reputation from a more alternative festival event, only happening for a short period of time, to a more established festival and exhibition event lasting for several weeks.
But still we keep on changing and evolving the festival with each edition, looking for new currents and trends in the contemporary moving image art world or even broader, the time based arts scene. Video still is the most important category for us but today you can’t perceive video art without also paying attention to its wider context within the contemporary arts, especially digital media, music, performance.
Why VIDEONALE is a unique festival and different than others?
TL: Videonale is the only festival where the selected works are shown for a period of several weeks in a museums exhibition, presented not in video programmes but as single presentations in special exhibition architecture. Videonale positions itself somewhere between a festival and a biennial, offering the exhibition but also a wide spectrum of additional events to discuss the situation of video art on a more theoretical level. We also offer a wide range of educational programmes, conducted in cooperation with schools and we try to engage a new public by also being present in the city of Bonn, discovering new spaces which have until then not been used for art. So, our special position is really somewhere between the museums world and the festival world which still today work quite differently.

In 2005 VIDEONALE festival moved to the Kunstmuseum Bonn. Did the space of an official art institution change the festival?

TL: Yes, the move to the Kunstmuseum very much changed Videonale’s profile, not that much as far as the selection of the works is concerned: we still work with a worldwide open call for entries and select the works with the help of an international jury. But the context of the presentation naturally changed completely. The Kunstmuseum Bonn is a modern but classical art museum, with strong focus on modern and contemporary painting, photography as well as sculpture and that’s what the museum’s spaces were designed for.
High ceilings, white cube spaces, a lot of daylight – not the best conditions for the presentation of video art. But Videonale adapted its concept to the space and started to develop – still under its former director Georg Elben – new exhibition architectures for each edition of the festival, dealing with the question of how one can present moving image art works in a museums space without using the black box system – still today the most common way to show moving images in exhibitions.
Hence, the exhibition architectures which were developed throughout the years are definitely something people pay attention to when visiting our exhibition.
But the possibility to show the selected art works in an exhibition context, of course, also changed the character of the festival. Today we can only show around 45 art works out of up to 200 works presented for the competition before the festival. This is since before the move to the museum the works were shown in several video programs on monitors or as projections but in the exhibition we show each work as a single presentation. This also distinguishes Videonale from other festivals which take place in cinema spaces, for example.

So, for the programme presented in Vilnius we tried to select works which represent the topic in its diverse aspects. There are works like Mahdi Fleifels XENOS or Shelly Nadashis A HIDDEN QUIET POCKET which reflect the more socio-political dimension of “the Wild”, while Constantin Hartensteins ALPHA and also Marianna Milhorats UNE TERRE FAMILIERE explore more the relationship between humans, techniques and nature and the question whose in control of whom in that network. And then there’re Pauline Boudry & Renate Lorenz who address the gender issue in their work TOXIC and the (im)possibility to reduce a personal identity to a clear gender identity. But we can only show a selection of eight works out of 38 which were presented in Bonn, so there’s still much more to discover. On the DVD we published together with the catalogue there are at least 25 works presented in full length; so, anybody interested is very welcome to order it from our website.
The last question (very traditional). VIDEONALE future plans.
TL & JG: We keep developing Videonale from edition to edition and are always thinking about new programmes and concepts. For VIDEONALE.14 and 15 we strengthened the festival format again which kind of took a back seat for the first editions after Videonale had moved to the museum. So, for the last two editions we had a very extensive festival programme with lectures, performances, talks, concerts and we also established a new format, the VIDEONALE.PARCOURS. For the Parcours we get in touch with art academies and select works by students to be presented in different institutions in the city of Bonn. The idea of this project not only was to establish a platform for young and upcoming artists but also to bring the festival back into the city, open up new spaces, also non-art-spaces, to the public and therewith make the festival easier accessible for everybody and more grounded in the cities community.
More information about VIDEONALE www.videonale.org/en
Rasa Barcaite